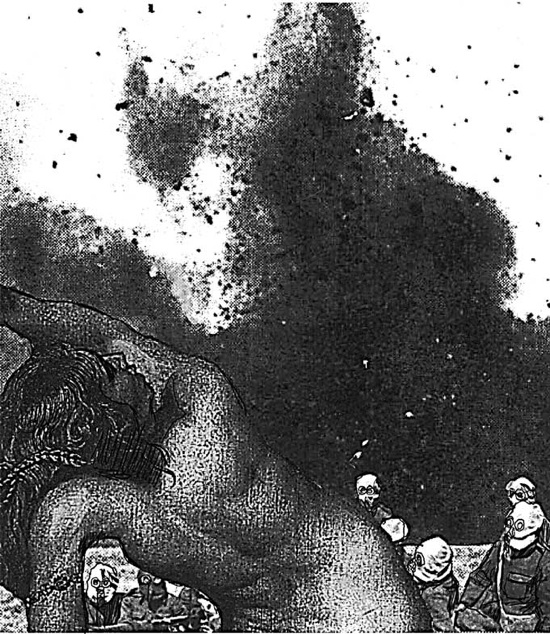 An epic romance for one performer.

Set in Manila’s flash-flooded streets, this grimy teen flick follows the attempts of two hip brothers to transform a geeky loner into the prom queen before an epidemic wipes out the entire city. Part-theatre show, part-science lecture and part DIY-vibrator making workshop, Sun Drugs crams all the exotic beauty and sweeping romance of The English Patient into 30 intense minutes and microwaves them.

Condensing the image-rich poetry of T.S. Eliot and Ezra Pound, the vivid travelogues of Jack Kerouac, the fascinating science lessons of Carl Sagan and the hormone-drenched characters of every lurid Hollywood highschool romance you’ve ever seen into one free performance, Sun Drugs is a glorious celebration of everything good in this world.

First performed by David Finig and directed by Naomi Milthorpe in March 2010. Sun Drugs is 25 minutes long and intended for one performer, though you could adapt it for more – go for it. 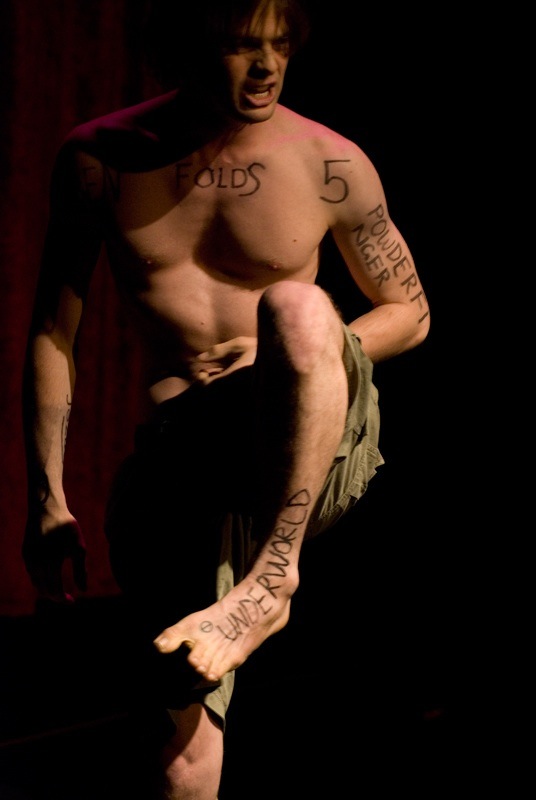 A man walks into a bar, pulls out some shaving foam and hands razors to the brunettes seated at opposite ends of the front row. He proceeds to shave his face by playing an elaborate variation on Colombian Hypnosis. What on earth is going on? It is Sun/Drugs – the half hour one-man show being performed this week in the Pit bar.

Sun/Drugs is presented by Australian artist Blind (there is no program so I cannot tell you if that is his real name) a charismatic young man with energy to burn. One part performance art, one part The English Patient and one part Dirty Dancing, this is a cinematic tale of epic destruction and high school prom queens set in the Philippines of all places.

It is pretty wacky. I liked it.

These disparate storylines are woven together and the whole is narrated in a combination of novelistic exposition and screenplay style camera directions with brief outbursts of physical exertion. It is vigorous, quirky and performer-centric.

There is definitely an intriguing piece of theatre here, though at times the different parts of the performance work at odds with one another. The performance art elements are arresting and affecting but many of them do not serve the story that we are being told. When they work they are marvellous – the way in which Cancer and Smallpox are differentiated from each other in their scene for example – but other elements, such as the extended shaving sequence at the beginning, are never made significant.

I enjoy how these sections break up the less visceral narrative sequences, but I think if this work is to be further developed they would need more functionality and to be tied more tightly to the narrative.

Blind is a very appealing performer and most of his success stems from this personal charisma. Though he embodies a wide range of characters with clarity – most of these are signified by nothing more than a pose and it is always clear who is who – they could easily be extended to create a richer fictive world. I would say that getting a director to further develop and hone this piece would be an excellent idea.

That said, I had a great time. In the intimate space of the Pit Bar the crowd was laughing and pretty much transfixed with this performance. It is extremely Fringey, extremely free, only half an hour long and only 25 people a night get to see it. Make sure you are one of them.

I must disagree with you. I loved Sun/Drugs, it had a quality of Performance Art which we rarely see in Wellington. I think to construe it as a piece that endeavors to be theatre, to tell a cohesive and understandable story is to miss the point of Sun/Drugs. The beauty of this work was when we understood nothing, because we felt everything. The power of the piece was how unhinged it was. I found myself sitting there with absolutely no idea what on earth might happen next. A creeping sense of danger that I might be his next acomplice in one of his deranged debarcles. But a growing sense of faith as I was drawn to this charismatic performer, he was our leader in this strange journey because he seemed so sure of himself, even as he demonstrated how to insert a cellphone up your Vaginal tract – he was so straight faced and confident in what he was doing.

Though he allowed us to laugh and enjoy ourselves, and though it was in a theatre bar, my understanding was that he was drawing from the traditions of the performance artists such as Yves Klein or Carolee Shee. People who challenge us not to comprehend – but to take us to the edge of the uncanny, via the limits of our comfort zones. He made us feel like voyeurs by making himself and others the victim in this weird game that we found ourselves enthralled in.

The parody ‘prom queen’ storyline that eventually brought the whole thing together at the end I thought was the weakest element because it allowed me, and the rest of the audience to feel safe and comfortable, have a chuckle, able to predict what would happen next. If Mr. Blind would take any advice from us I’d say less story — more surreality. The thing he needs more of to get this piece to reach its potential, is definetly drugs in the sun, the last thing he should do is get a director! 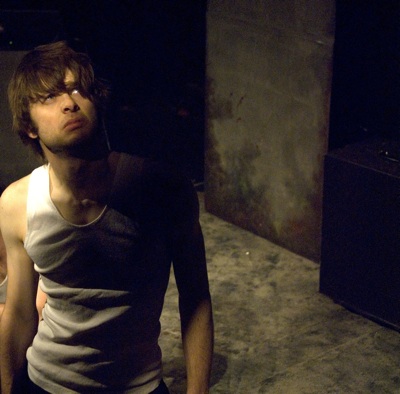