What Happened At Altavista 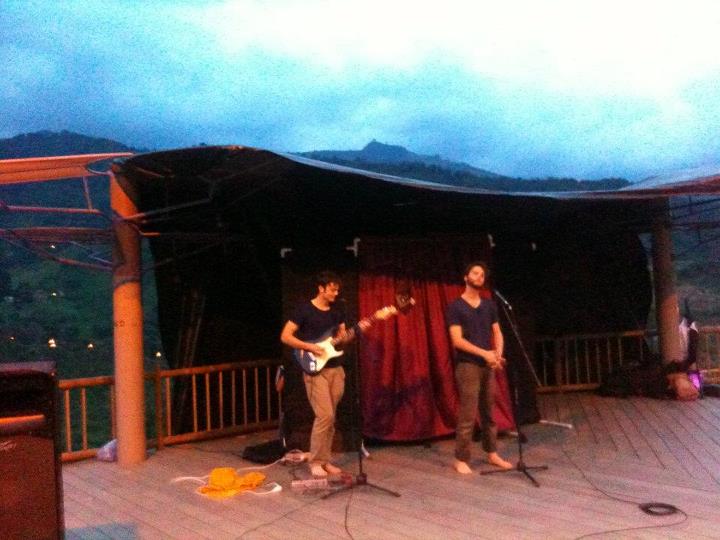 So this Saturday, what can you say? Here’s a roundabout way of saying, What Happened At Altavista, as best as I can talk about it.

So on Friday we were cooking dinner at Campos with the Fulbrighters, aka a flock (do you call it a flock?) of North Americans down in Colombia for a year teaching English, and we’d been hanging out all day at Santa Elena dancing in the rain and getting hit on by 70 year old drunk dames, and then suddenly mid-dinner we were surprised by the arrival of Gustavo and his crew from La Mantana que Pience, which is a gallery in Medellin, and so Chris and I played a short set in our downstairs studio and at the end of it Gustavo invited us to play a couple of tunes at a ‘social event’ the next day, which we all kind of forgot about because we were all suddenly employed in trying to rescue Marlon’s taxi, so 13 of us pushing the cab up a steep hill in the rain, slipping in the mud and Andres passing a box of wine, and when we finally got them free and were taking photos on the road it was all too late and everything was forgotten about and lost

until around 3pm the next day when Andres told us Gustavo had called and we were on for that evening, playing a gig at 6. So Chris and I jumped in a taxi with our gear and rolled down to La Placita, which was our rendezvous point – at Placita we realised we had no idea where we were or what we were doing, but just then Gustavo arrived to pick us up and drove us through the city, east I think, across the valley over the river and into the outskirts, finally up into a tiny village community called Altavista up in the hills – like everywhere in Medellin up in the hills – and at the gates of a rescued animal park we met Fulbrighters Michelle, Ryan and Justyn who had decided to join us –  such a grand sight, seeing Justyn’s shape from a distance, white dude in a polo shirt looking so distinct in that setting – and such a fucking rad thing, these three americans we’d met like 30 hours earlier joining us for a second adventure –

so we scrambled up a grassy hill to this outdoor stage and joined about 30 kids trying to assemble this outdoor marquis, then Michelle and Ryan and Justyn chatting with the kids and Chris and I setting up onstage but half-dazzled by this extraordinary sight behind us, the sun going down and twilight over the hills, the most Colombian sight you could imagine, and flashes of lightning, and then we were set up and soundchecking and then with 70 or so people bunkering down on the hillside above us we started playing 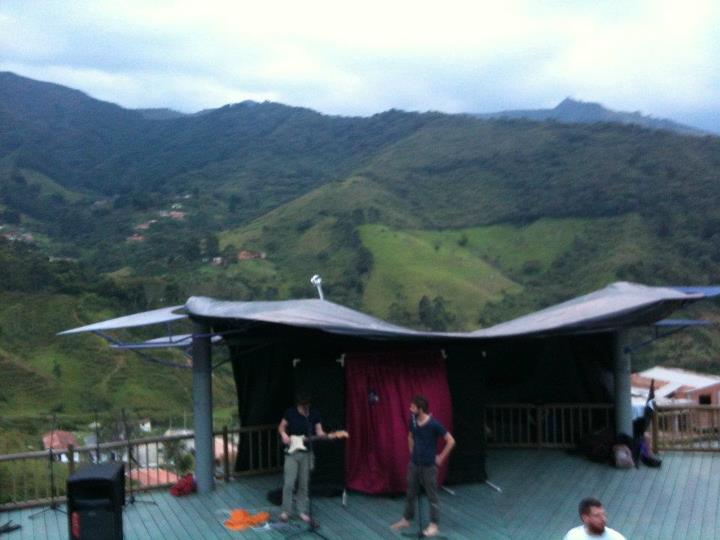 we played move to canberra, and the surreal sight of seeing several people in the crowd mouthing the lyrics back to me – ‘I do it for you, you do it for me’ – and of course it was a couple of cats from Gustavo’s crew who’d been at Campos the night before, and it was the strangest and loveliest thing – and then when we finished, Michelle was pressganged into getting up onstage and being our spanish liaison/MC, introduced us – los hermanos finnigan – and read the spanish translation of Because to the ground, which was awesome and properly lovely, and as much a surprise to her as to anyone I think, meanwhile ryan and justyn both roped into filming and recording stuff for us because they are lovely and we have no shame,

and then with the sky darkening above us and the microphone sparking terrifying electric shocks every time I got too close to it and with more humans filling up the hillside we played fireflies in the dark, feed it medicine and then christmas is the time, which is a joy just to watch the confusion on the audience’s face when we suddenly start yelling ‘navidad blanco!’ and ‘arbol de navidad!’ and then two princes, getting it all out of my system the way that song does, and they clapped and the MC said in english ‘Thank you, you have made us… very happy.’

and then crashing on the benches to watch a community theatre group bust out an extraordinarily tight and terrifyingly intense piece called ‘Seven Lives of the Cat’ or similar with the most hardcore abortion scene I’ve ever seen performed for four-year-olds, and then an abstract political parable about latin american politics performed by three bums with a shopping trolley, and then the next band was setting up but we were all falling down the hill, stumbling into cars, and gustavo driving us back into the city singing ‘papa noel papa noel’ and me laughing and watching the young couples in the streets and a late night bakery selling wedding cakes –